Nature and I are not always the best of friends. We have a little bit of a love-hate relationship. The hate mostly stems from my dislike of bugs, insects, snakes, spiders and really any type of creepy crawler. I can live in perfect harmony with any of these creatures as long as they do not cross into my personal space!

Unfortunately, most of these creatures do not live by my rules and seem to enjoy tormenting me. The rules, my laws for nature, are really quite simple; all things that we learned as children:

Rule 1: Do Not Be A Nuisance

How many times did your parents ask you to “be on your best behavior”, especially when you were in the presence of company? (Or how many times have you told your kids that?) And if you had to boil it down, what does mean? It means: don’t be a nuisance!

If only the world’s little critters could learn to be on their best behavior. No fly-bys, buzzing in your ears or sneaking up and scaring you!

We have found flying insects to be plentiful in Tasmania. We may have even seen the world’s largest flies that look a lot like bees. Even when there is a gentle breeze, I find myself making a scene, swinging and swatting to keep the flying pests from buzzing around my head and landing on me…which leads me to rule #2.

Rule 2: Do Not Touch

I know that you were taught to keep your hands to yourself. So, why is it okay for those pesky insects to land, hop, crawl or bite you? If I returned the favor, the outcomes would most likely be unfavorable for those little creatures (i.e. they would be smushed)!

Those that land on you are definitely annoying, but the ones that bite or sting are the most unwanted. They tend to sneak up on you and then leave you itching, scratching, swollen, and sometimes even scarred. Maybe they know that I do not like them, which makes their bites even sweeter. However, I think I have been left itching from more than my fair share of insect bites.

If the little creatures could just learn to give us all a little personal space then I think we could definitely live in better harmony.

Rule 3: Do Not Invite Yourself

Uninvited house guests or those that overstay their welcome are never a good thing. This applies to those creepy crawlers that make themselves at home in your personal space or those that sneak up and scare you. They are some of the worst!

While in Tasmania, Kevin found an uninvited guest in his backpack. While packing to leave our B&B, Kevin pulled his sweatshirt from his backpack and found himself questioning the large, brown, fuzzy object that came into view. After further inspection, he confirmed his fear that it was indeed a large spider. I reluctantly peeked, freaked out a little bit, and then immediately became paranoid. Where else had spiders stowed away and would they surprise me next?! 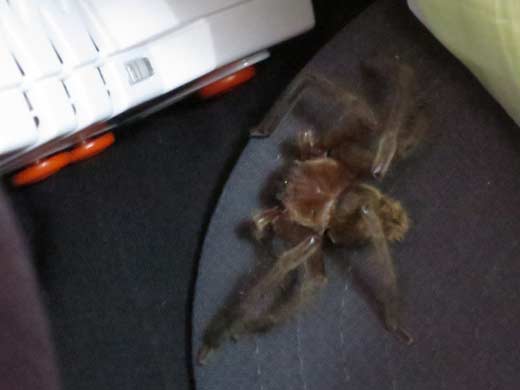 The scariest looking house spider in the world hiding out in Kevin’s backpack.

I poked my head out the door and sounded the alarm to our host and new friends Barry and Helen in the hall. I probably had a hint of panic in my voice as I told them about the seriously big spider. Kevin acted a bit more rationally asking if they knew what type of spider was large and brown…and if it was poisonous.

Barry proceeded into our room to inspect the spider and concluded that it was “just a huntsman”—which is a common house spider in Australia. We were relieved to learn that they are harmless and considered a “good spider” as they eat other insects, roaches, etc. without spinning any webs. Barry reached calmly into Kevin’s backpack, got the spider to crawl onto his hand, displayed the spider to us, and then eradicated him to the front yard. A huge thanks to Barry for evicting our unwanted guest! Even though this creepy crawler was considered a good spider, I would have preferred that he keep a safe distance from our belongings. Thankfully, we have not found any other stowaways in our stuff…yet!

Over the course of our travels, my boundaries have been pushed and tested. (Especially in China; See Duct Tape To The Rescue.) My tolerance level has definitely increased a bit over time. Nonetheless, I don’t expect nature and I to become best friends any time soon.

If only all of God’s creatures could abide by the three simple rules above, things would be a bit easier (at least for me)…and I would definitely enjoy nature’s company a lot more.

Sleeping With One Eye Open